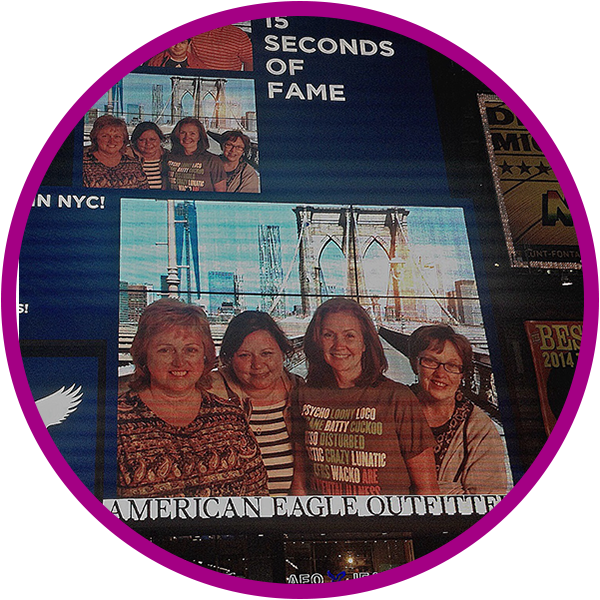 Rushford’s Sue Willmore, shown with her family on a big screen in Times Square, NYC.

Rushford, along with HHC Behavioral Health Network partners Natchaug Hospital and
Hartford Hospital’s Institute of Living (IOL), spent the summer of 2014 promoting awareness and helping to stop the stigma surrounding issues of mental health and addiction.

The “Stop the Stigma: World Wide Edition” contest provided every employee with the popular “Stop the Stigma” T-shirts, taking them where they went to raise awareness about the stigma of mental illness and addiction. From the road, many sent back pictures of themselves, their family members and even their pets wearing the shirts. Rushford at Durham’s Sue Willmore was among the big winners, with her family photo displayed in Times Square, New York City, judged most unique photo overall. Rushford at Meriden staff gathered in front of the building sign for a July 2014 “Flashmob Friday” event.

The BHN marketing team celebrates their Best of New England win upon its announcement in Boston in May 2015. (Left to right): Shawn Mawhiney, Carol Vassar and Amanda Nappi.

Rushford, BHN recognized with “Best of New England” by NESHCo

In May 2015, the Hartford HealthCare Behavioral Health Network marketing team, including Rushford’s Carol Vassar, Natchaug Hospital’s Amanda Nappi and HHC BHN Marketing Director Shawn Mawhiney, received seven Lamplighter awards, including the Best of New England, which is the top honor given at the New England Society for Healthcare Communications (NESHCo). The awards — which included three golds, two silvers, one award of excellence and overall Best of New England — were given at the 25th annual Lamplighter Awards Ceremony at the World Trade Center in Boston.

The top prize was garnered for a series of free public forums under the title “National Dialogue on Mental Health (NDMH).” These forums were organized across a wide geographical portion of the BHN’s service area, tackling topics of both mental health and substance abuse that are of interest to the public based upon local HHC affiliate recommendations. This was the second year for the NDMH, which is a community-based response to the tragedy that occurred at the Sandy Hook Elementary School in December 2012.