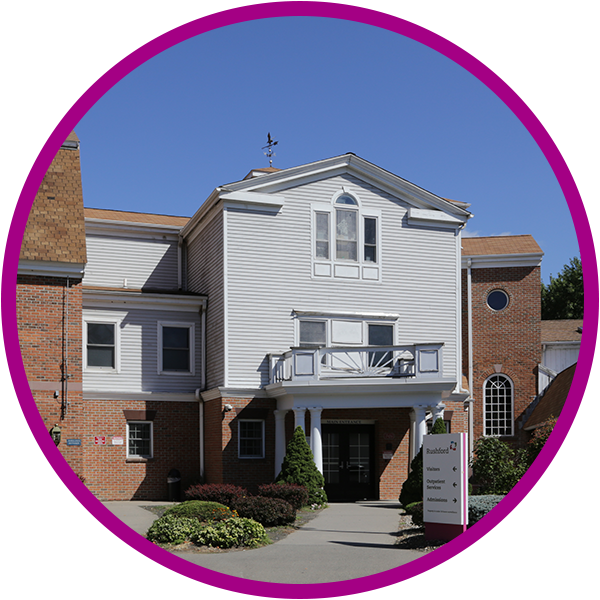 Rushford at Middletown in 2015.

In 1987, Rushford Center was adopted by the board of directors as the name of what was once the Tri-County Alcohol Council.

“The name didn’t fit any more,” recalled former Rushford President and CEO Jeff Walter. “To call ourselves ‘tri-county’ was confusing, and our mission had broadened to the prevention and treatment of other addictions, such as opioids.”

Given the expanded services and growing client base, the time had come to bring all Rushford programs under one roof from several sites around Middletown. State lawmakers and several state departments, recognizing Rushford’s success, were eager to help, offering more than $2 million between 1988 and 1990 for the purpose of purchasing a new facility. Early promotion piece for Rushford at Middletown, circa 1991.

Rushford officials launched a capital campaign to raise additional funds that resulted in the purchase of the former Town Farms Inn on Silver Street in Middletown in 1990. With the dawn of the new decade, Rushford’s employees numbered nearly 50, and afforded the organization the opportunity to again expand programming, this time to include an outpatient treatment program for recovering substance users — both adults and teens — that allowed them to receive treatment and remain at home and employed.


In March 2013, the post-graduate addiction medicine fellowship program based at
Rushford’s Middletown site was accredited by the American Board of Addiction Medicine (ABAM) Foundation.

Rushford was among eight of the nation’s leading medical organizations to receive ABAM Fellowship accreditation in 2013, joining an elite group of 23 other ABAM Foundation-accredited programs across the United States and Canada. Each institution meets — and often exceeds — the Foundation’s stringent standards of clinical excellence and quality in physician training in the specialty of addiction medicine.

“An important goal of the fellowship is to prepare candidates for independent practice and the ABAM certification in addiction medicine,” noted Samuel M. Silverman, MD, FAPA, Rushford’s ABAM Fellowship Program Director. “By doing this, we ensure that high quality, interdisciplinary, evidence-based addiction treatment programs can be provided to those most in need of this clinical service.”

Rushford’s addiction medicine fellowship offers physicians a one-year training opportunity in the evaluation and treatment of patients with substance use disorders. Each fellow trains across a broad array of clinical settings
at Rushford’s Connecticut campuses and other institutions within the Hartford HealthCare Behavioral Health Network, including Hartford Hospital’s Institute of Living.

In June 2015, Dr. Brian Murray became the first Rushford addiction fellow to graduate the program under its ABAM affiliation.

Pamela Mirante, LCSW, poses before starting at a yoga class at Rushford in Glastonbury.

These services include acupuncture, creative journaling, yoga, and a free resource library.

Suboxone™ treatment for Rushford at Glastonbury


Rushford at Glastonbury offers medicationassisted treatment for opioid recovery. This program offers Buprenorphine-Nalaxone (Suboxone®) or Naltrexone (Revia®, Depade®, Vivitrol®), medications providing clients a lower risk of abuse and dependence, fewer side effects, and a long duration of action — as well as blocking the urge to “get high.”

Along with prescriptions and monitoring, the Rushford at Glastonbury Suboxone™ program focuses on treating adults 18 and older with psychosocial and other core therapies, all provided with the utmost privacy and discretion, including a Working Professionals Program, where group therapy sessions are offered early mornings or evenings to enhance the recovery experience.


Throughout 2014, Rushford worked to raise awareness both internally and externally of the signs and symptoms of an opioid overdose, and how to obtain the lifesaving drug naloxone (Narcan™).

“Naloxone (Narcan™) is a medication that, with minimal training, anyone can use,” said J. Craig Allen, MD, Rushford Medical Director. “The atomizer creates a mist that is absorbed through the nasal mucosa reversing a potentially
lethal opioid overdose.”

The use of prescription painkillers and heroin is growing in Connecticut and across the nation. According to the Office of the Connecticut State
Medical Examiner, there were 174 accidental deaths involving opioids in the state during 2012. In 2014, that number increased to more than 500.

To battle this issue, Connecticut state law changed, allowing naloxone to be prescribed to the family members or friends of an opiate-dependent person. First responders also may carry naloxone, and a new law, which HHC Senior Vice President for Behavioral Health Pat Rehmer and Dr. Allen testified in support of, allows education and distribution by certified pharmacists.

“Like AEDs that can save the life of a person having a heart attack, we’d like to see naloxone at the ready with first responders and the family and friends of opiate-dependent people,” Dr. Allen said.

For its part, Rushford created opportunities for those with opioid addiction and their families to attend a free class to learn how to administer naloxone, with a prescription available once the evening class was completed. This became a mandatory program for all family members of clients entering Rushford’s adolescent programs, and is also a mandatory training for all Rushford employees. In addition, a crowdfunding effort, sponsored by the Rushford Foundation, raised $3,680 over a 40-day span. A video supporting the “Naloxone Saves
Lives” campaign was recognized with a Lamplighter Award by the New England Society for Healthcare Communications (NESHCo) at its annual meeting in May 2015. 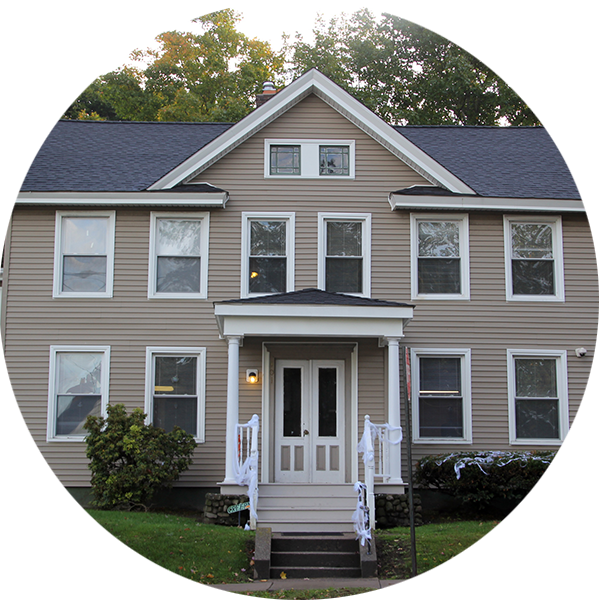 Rushford at Parker North in Meriden.

September 2014 marked the opening of Parker North, Rushford’s five-bed, all-female home. Parker North provides an opportunity for community living to people who are ready for discharge from Connecticut Valley Hospital (CVH) and other state hospitals after long lengths of stay requiring higher levels of care.

Located in Meriden, this program provides a home-like atmosphere where people can receive skillbuilding programming and 24-hour staff support to assist with reintegration with the community. The house, originally a duplex-style two-family structure, accommodates two apartments with separate sleeping and bathroom areas on the second floors, and common living, kitchen, and laundry areas on the first floor. There are five bedrooms. The program is fully integrated with the continuum of clinical and community support services that Rushford provides at its outpatient center in Meriden. Funding for Parker North was provided, in part, by the Connecticut Department of Mental Health and Addiction Services. 
Latino Services at Rushford has added an Intensive Outpatient Program (IOP) to its service line at the organization’s Meriden facility. It offers group therapy in Spanish to individuals in need of consistent support throughout the week, and clinicians facilitate all groups in Spanish for those clients who are either monolingual or who prefer to receive treatment in Spanish.

The Latino IOP is staffed with a multi-ethnic, bilingual and bicultural (Spanish and English) group of mental health professionals with decades of experience working with the Hispanic population and who are dedicated to helping clients recover from mental illness and/or substance use and dependence. Because of its early success, the program was expanded from three days per week to five.

To better serve the needs of the communities it serves, Rushford expanded the following services in 2014/2015:

The detox unit in Middletown added three beds, bringing the total number of detox beds to 19, expanding access to care for clients.

Connecting to Community Through Leadership